This report specifically aims at illustrating the general impact of two distinct climate changes scenarios on the financial performance of the plants that operate in these six countries (Germany, Italy, France, Brazil, the USA and Mexico).

Looking at the six countries in focus, the change is material for cement production. In a 2°C, ACT scenario, the EBITDA to be earned in these six countries roughly remains stable till 2050, however, individual companies in these countries, could face losses of up to 70% of EBITDA in these markets, during the transition. The 2.7°C, LCT scenario provides a growth story across the six counties, with an EBITDA growth of ~75 % till 2050.

In the 2°C scenario, for the operations of the three case study companies (thyssenkrupp, HeidelbergCement, and CRH) in Germany, Italy, France, Brazil, the USA and Mexico, operations see the financial risk materializing starting in 2020. Change in operations is required already in the short-term to maintain EBITDA. 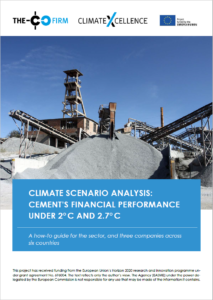